The meaning of Peridot.

Recently in the studio we’ve been getting interested in finding out more about the meanings of certain stones.  Each stone has its own history, myths and qualities associated with it.  From the fantastical to the practical they all claim to posses certain powers and uses.

We thought it might be good to have a closer look at the different stones I use in my collections, starting with Peridot which I have used in my ‘Encrustations’, and ‘Wonderings’ collections. Peridot has often been confused with many other gemstones, including emerald. In fact many “emeralds” of royal treasures have turned out to be peridot. Although a distinctly a different shade of green, peridot is often referred to as “evening emerald”. Emerald is a dark green as opposed to a yellow green and always contains inclusions. Other green gemstones confused with peridot include apatite (which is much softer), green garnet (which has no double refraction) and green zircon (which is much heavier). Other gemstones rarely have as nice a yellow component to their green colour as you find in most peridot. However darker green peridot can be confusing to identify. 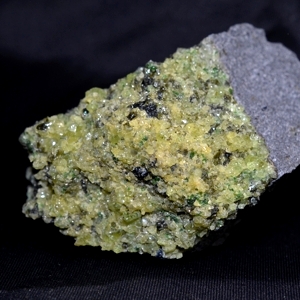 The History of Peridot.

Peridot is believed derived from the French word ‘peritot’ which means unclear, probably due to the cloudy nature of large stones. However it could also be named from the Arabic word for gem, ‘faridat’.

Dating back over four thousand years, the tiny, Egyptian owned St John’s Island (now Zabargard ) is documented as the first source of peridot. Early Crusaders, who visited the island, introduced this gem to Europe upon return from battle.

In ancient times the peridot was believed to be a stone of springtime and a gift from Mother Nature. It was also said that a dream about peridot foretold impending danger.

Napoleon once made a gift of peridot to Josephine as a symbol of undying love and admiration. Legend also has it that peridot was the favourite gemstone of Cleopatra. Energies: Protection, Money, Healing (known to have healing effect on the gall bladder and liver.)